Posted on February 19, 2019 by under Uncategorized

HARD TO BELIEVE that someone like me could approach any subject with an open mind.  If you caught my Facebook post, you saw that I called Rust Valley Restorations a “train wreck”.  In this particular instance, any publicity is good publicity.

SOME OF YOU may remember a posting shared on Face Book of a cache of vintage muscle cars and other collectible vehicles for sale somewhere out in B.C. with an asking price somewhere North of a million bucks. I was curious, but the posting shared few details.  Thanks to some of the producers of ‘Highway Thru Hell’, we now know who we are dealing with.  The show’s preview clips showed a larger than life persona named Mike Hall- who looked amazingly like the ‘Rasta Blasta’ from HTH. No mistake there.  Good gig: blow up rocks and collect cars found through your travels.

I’ve done something similar through years of hauling scrap cars as a day job.  Now that age is creeping up on us, we now want to be rewarded for preserving some vehicles that may have otherwise been lost. *** If you are calling ‘bullshit’ here, just take a trip down to the local scrapyard here and look at what is now sitting on their scrap pile now that I am no longer hauling scrappers.  At least I used to save about one in ten.

WHAT you may be wondering is why is this guy struggling financially? Having a collection like this should be like a license to print money.  Perhaps something not sufficiently emphasized here is the fact that he put out good money up front to buy these treasures, then there is the overhead of carrying such a collection.  How about having to pay salaries and buy parts and materials? Does anyone make money doing restorations?  Those whales who fund the six figure builds are few and far between.

SO, besides the 300 vehicle inventory on several acres, what else do we have in common? (See picture following text.) We may just seem a little un-approachable at first brush. Let’s just say you get that way after a few decades in the business.  I don’t blow shit up, but I can sure take shit apart.

ONCE you get past the fact that the Rust Valley show is hard to watch at times, what is the takeaway here?  The way things are going, car collections (or hoards) found in little backwater towns are headed for extinction.  When the cost of opening the gate isn’t being met- things have to change.  Most of the time, that involves the arrival of a crusher.  People need to step up to support operations like ours.  We aren’t hoarders- we are preservationists. We are only holding onto our inventory until someone- a serious buyer steps up recognizing the value of the service that we provide.

SINCE you’re here, check out the rest of my website, but keep in mind that it doesn’t even scratch the surface.  For a 50 cent tour of The Chrome N Rust world headquarters, give me a call @ 403-341-3708.  If I like you, I may even forgo the 50 cent admission.  To see how it really is on the other side of the mountains, visit rustbrosrestos.com 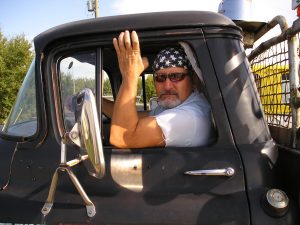