Posted on November 17, 2018 by under Uncategorized

WE have all kinds of things that drive us crazy.  Lately, this isn’t even driving distance, but more like a walk?  I cannot watch the news without wanting to throw something solid through the T.V.  So many examples of SHEER STUPIDITY- supposedly from people who are supposed to be world leaders, and then there are groups whose agendas would have us eating grass and drinking water and holding in our FARTS, all while making no moves that would exacerbate CLIMATE CHANGE.   So many assholes- so few bullets.

ONE of those such triggers are those who want to deny or alter  HISTORY to suit their purposes.  Those who want to tear down monuments or erase the good things that some of these historical figures did that shaped our society into what it is today- or was until recently.  Free, democratic, with the highest standard of living- ever.

OLD CARS and TRUCKS that some of us lovingly restore (or modify) are a testament to our great past.  Those who would have us driven around in electrically powered cars (short for carriage, by the way) overlook the fact that the electricity must be produced by another power source: natural gas, or dirty coal, until solar and wind generation is economically feasible and ecologically sound. i.e. NO DEAD BIRDS.

THERE are those who want to accelerate the demise of the gasoline powered automobile by ensuring that the means to repair and maintain them are limited by built-in obsolescence in the form of computer controlled engine and component management systems.  When you take a late model car or truck to a factory approved repair facility (the dealer’s garage) and the repair procedure is to throw parts at the vehicle in the hope of fixing the problem- you have to know the writing is on the wall.

RECYCLING businesses, or wrecking yards if you will, still sell parts to repair vehicles- usually if the vehicle still holds enough value to warrant the cash outlay for the drivetrain part -and the labor to replace it.  Most  vehicles these days do not. More often than not, these vehicles are ‘recycled’ in much the same manner as an old refrigerator, a broken television set, or a BEER CAN.

BESIDES the ‘vintage’  (Carburated- pre-computerized) cars and trucks I cherish, there are also some examples of ‘late models’ that deserve a new life. This could involve dealing with the devil- technology, or doing a retrofit. After all, it is hard to argue with something that rides comfortably, and looks good, and does what you want it to do.  Kind of the point of resto-modding an old car or truck.

IF you value history or just like the look of ‘old’ cars, I can help.  My yard has quite a few projects that need new homes, and I also have TONS of parts to repair or build just about anything.  Check out the rest of the website or PHONE (No texts-or I hang up) chrome n rust world head-
quarters to set up an appointment to see for yourself. 403-341-3708 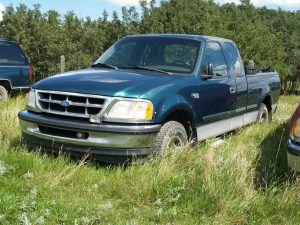