Posted on March 19, 2018 by under Uncategorized

The calendar says Spring is tomorrow.  The view out the window says otherwise.  Nevertheless,  the first hints of a change in seasons in the automotive universe began last weekend with the E-G show and auction. (There was also the Taboo sex show.)  I didn’t see either.  Next up is The Quick Times Swap Meet.  I’m thinking of bringing my ’78 shortbox stepside instead of the usual table full of trinkets.  I’ll make up my mind about that later today.

That said, in some ways I miss the old website, mostly due to the fact that I did not transfer any of the history or ‘my rides’ data to this website. Maybe later.  A strictly sales website lacks character and doesn’t really reflect what I am all about.  Let’s have a look at the name of this site: Chrome n Rust.

Chrome n Rust reflects the fact that I am not selling ‘new’ cars or restored ‘gems.’  My definition of cars includes chrome- not some monochromatic soapbar on wheels. A fact of life with older cars and trucks is rust.  I’m selling project cars here- kind of a no-brainer.   Chrome n Rust also reflects something about myself and most of those of you reading this.  Our hobby is mostly about the past.  The cars and trucks we love are a connection to the past.  This connection is either a direct link to days gone by, or for the younger generation a vicarious connection to the past.

As we get older our memories (and chrome) seem to shine a little brighter.  Rust pops up when we look a little harder at the details.  There are the cars that we weren’t smart enough to hang onto, or even wrecked.  There are people we know who didn’t live to get old.  Then there are the things we thought of a ‘normal’ family life. ‘Nuff said.

In my universe, the greatest movie of all time was ‘American Graffiti’.  It hit the screens at the same time I was in high school.  My wheels at that time were a 100cc. Kawasaki dirt bike and a ’73 Datsun 1200.  In grade 12, I decided that I needed to have a cool set of wheels to at least leave High School in style.  I put together a 1948 Monarch coupe with a junkyard flathead V/8.  We were able to do the final hookups in the High School auto shop and get it running in time for ‘Grease Days’.  I also had to take it home that same day as the instructor (a character nick-named  ‘stogie’) forbade me from bringing the car back into the shop. There is a picture partially showing the coupe in the High School Yearbook.

The truth is, the Monarch was not all that fast- even with a ‘built’ flathead.  Attempts to ‘peel out’ resulted in blown up transmissions and broken driveline parts.  Best to leave the hood on, and cruise like I had something going on.  No John Milner moments there.  That came later. At least I didn’t die young.  I will leave you with a picture of a Camaro where the owner was not so lucky. Drive Safe. 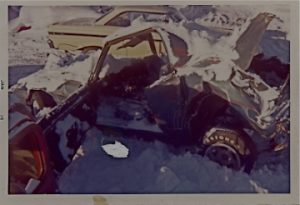